The European parliamentary elections are coming -- end of May 2019 to be exact.

The European Commission and the European Parliament have been subjected to a rising (and often justified) amount of criticism in recent years. Examples of these are the General Data Protection Regulation (GDPR), the new Directive on Copyright in the Digital Single Market (COD), migration and security policy, electoral system reforms, foreign policy regarding China, Russia and the United States, etc. The list goes on and on.

EU parliamentarians of the classic European "people's parties" (EPP, S&D etc.) will have to reckon with bitter losses of votes, as many of their voters are likely to switch to progressive or reforming parties -- be it to the economic left or right.

In addition, large portions of the European population are increasingly critical of their own state governments. Here too, the traditional people's parties have had to contend with losses of votes in recent years. The reasons for these state government criticisms partly overlap with the ones directed against the European Union.

Despite years of indoctrination about the success and benefits of the "European Project", the impression is spreading throughout Europe that the benefits will not ultimately reach the population. Examples of these failed benefits include the numerous financial and social reforms of the EU. This distrust of the European Union on the part of citizens is likely to be reflected in the ballot paper in May.

However, how will these losses of votes be explained to the general public? Can we expect a whole set of empty sentences ("We must redefine ourselves party's position", "We have neglected our voter base", "We should have represented our interests more clearly")? Hardly, since this presupposes self-reflection. There is no question that this is present in many parliamentarians -- but not in the parties as such. It would be much easier to blame others for the own defeats, wouldn't it? "The EU sceptics are to blame!", "The voters were all Nazis!", "Fake News!", "Russian hackers!"

Bizarrely the Russian Hackers™ have become "highly active" again in the build-up to the European parliamentary election (F.A.Z. of 2019-03-22) .... almost as if one has to reckon with a Russian "influence" in the European elections, which will explain the rise of the "alternative" parties and the vote loss of the traditional ones.

However, the exact final plan of the Russian Hackers™ is unknown to any media outlet or politician reporting about the alleged Russian "influence". Hа здоровье! 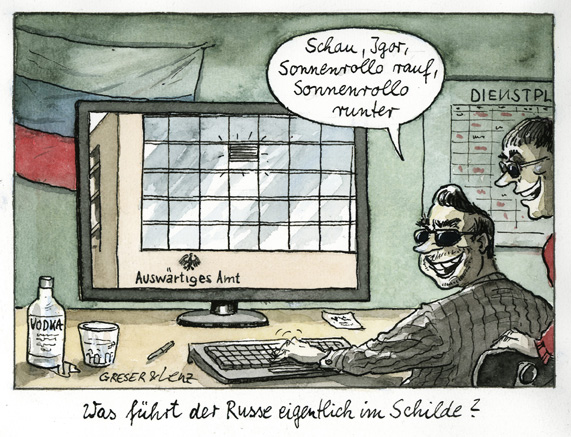 Copyright © Greser&Lenz, 2018. "Look, Igor. Sun blinds up. Sun blinds down." / What's the Russian up to?
(The building's façade reads "[German Federal] Foreign Office" as a reference to a "Russian hacking" in the past)

It looks like Count Dankula's prediction for 2017 will finally be true: Russian Hackers™ will be blamed for literally anything, especially elections.

You can find me on the following (anti-)social media platforms:

, which is also compatible with Apple News. The RSS feed is also available in JSON format.

If you are concerned about your privacy, you can also reach this site via the TOR network using the address http://uddjcpwm6cklresvsjmwy46ozgus3infkiroeqqzc6mmz4dwunelzpad.onion/


I collect all your fucking data and do whatever the fuck I want with want. I don't give a single fuck. get rekt.